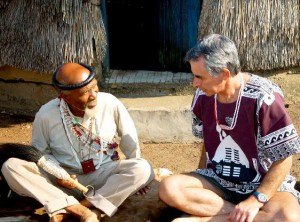 David Cumes, M.D. was born in South Africa and is a practicing sangoma and surgeon, He received his medical training in Johannesburg and has taught at Stanford Medical Center. After spending extended periods with the San hunter-gatherers in the Kalahari and publishing on the healing power of nature, “wilderness rapture” and general concepts of healing he was initiated as a sangoma in 2002 after which several other related publications followed. He founded an indigenous healing center in the far north of South Africa but has since had to leave this pristine 3000 acres of “Eden” after five years of intermittent immersion in the elements.