The Light in the Dark: the Search for Visions 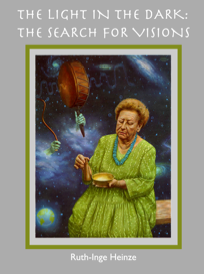 You may purchase this book with PayPal using the link above, or mail a check using this Order Form.

Ruth-Inge Heinze’s timely book, Light in the Dark: the Search for Visions, explores the role of the visionary realm in her own life as well as in the life of others. It is a timely contribution that provides guidance as to how to connect with our visionary faculty, Stanley Krippner comments on the book:
Ruth-Inge was a transformative force in the lives of many people, and it was remarkable to read of her own transformations over time. In this book, she describes her parents as conscientious but unemotional, a trait surprising to those who know of her passionate opinions. Nonetheless, her mother was known for her generosity and her father cultivated a garden that saved the family from starvation during the bleak years of the Second World War and its aftermath. As a young child, Ruth-Inge was standing along on a Baltic Sea beach when she experienced a sense of oneness with the sun, the winds, and the sea. Following what she calls “this interconnectedness,” Ruth-Inge’s parents thought he had suffered a heat stroke and kept her in bed for several days.

Throughout this book, Ruth-Inge laments the lack of visions in the contemporary era and spends considerable time defining and describing visions and the role they play in individual and social transformations. She observes how incarnating her visions and dreams kept her alive, giving her the strength to continue her work. Her childhood feeling of “interconnectedness” gave her a standard gauge against which to measure later experiences as to whether or not they were genuine.

The book is available from ReVision Publishing (or on amazon.com). Please form on the website to place your order together with check payment (mail to PO Box 1855, Sebastopol, CA 95473). PayPal option. All proceeds support the conference.