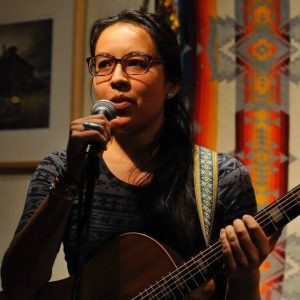 Lyla June Johnston is a musician, public speaker and internationally recognized performance poet. Lyla June ultimately attributes any achievements to Creator who gave her the tools and resources she uses to serve humanity. —

She was raised in Taos, New Mexico and is a descendent of Diné (Navajo) and Tsétsêhéstâhese (Cheyenne) lineages. Her personal mission in life is to grow closer to Creator by learning how to love deeper. This prayer has taken her on many journeys and materializes in diverse ways.

She is a student of global cycles of violence that eventually gave rise to The Native American Holocaust and the destruction of many cyclic relationships between human beings and nature. This exploration birthed her passion for revitalizing spiritual relationships with Mother Earth and cultivating spaces for forgiveness and reconciliation to occur between cultural groups. She is a co-founder of The Taos Peace and Reconciliation Council, which works to heal intergenerational trauma and ethnic division in the northern New Mexico. She is a walker within the Nihigaal Bee Iiná Movement, a 1,000-mile prayer walk through Diné Tah (the Navajo homeland) that is exposing the exploitation of Diné land and people by uranium, coal, oil and gas industries. She is the lead organizer of the Black Hill Unity Concert which gathers native and nonnative musicians to pray for the return of guardianship of the Black Hills to the Lakota, Nakota and Dakota nations. She is the also the founder of Regeneration Festival, an annual celebration of children that occurs in 13 countries around the world every September.

In 2012, she graduated with honors from Stanford University with a degree in Environmental Anthropology. During her time there she wrote the award winning papers: Nature and the Supernatural: The Role of Culture and Spirituality in Sustaining Primate Populations in Manu National Park, Peru and Chonos Pom: Ethnic Endemism Among the Winnemem Wintu and the Cultural Impacts of Enlarging Shasta Reservoir. She is a musician, public speaker and internationally recognized performance poet. Lyla June ultimately attributes any achievements to Creator who gave her the tools and resources she uses to serve humanity.

She currently lives in Diné Tah, the Navajo ancestral homeland which spans what is now called New Mexico, Colorado, Utah and Arizona. She spends her free time learning her engendered mother tongue, planting corn, beans and squash and spending time with elders who retain traditional spiritual and ecological knowledge.